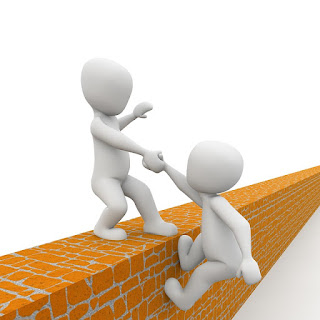 It's been a long time since I've been a student, but for the life of me, I can't remember having so many fundraisers.  I teach at two schools and my kids attend two different schools. There are months when we will have one or more school or charity fundraisers per week, most of them involving food. While it's great to get a break from cooking, it's hard on the budget and the waistline, but we support our schools and/or our favorite charities as much as possible.

My kids were barely talking when they learned the phrase "sharing is caring".  Well, let me restate that, my husband and I taught them the phrase, but even though they are now 9 and 11, the learning process is still underway.  My husband and I are children of Cuban immigrants and didn't exactly enjoy a life of privilege.  We both remember having everything we needed, not really feeling poor, but we were keenly aware that our resources weren't exactly plentiful.  Furthermore, not only did our parents have limited English language skills, they also were not college educated in their homeland, so they had to take up low paying jobs and often work extremely hard for those menial wages. Regardless of their circumstances, our parents taught and modeled a strong work ethic and enabled us to stand on their shoulders so we could achieve what they could not. They also made sure that we didn't forget where we came from and instilled in us a sense of charity and generosity.  Our parents drilled into us that we are blessed to be a blessing and not entitled to anything. And that, my friends, is a message I remind my children and my students of every day.

So what is it going to take to create that "culture of charity"?   Let's take a look at the definition of school culture according to The Glossary of Education Reform.  "The term school culture refers to the beliefs, perceptions, relationships, attitudes and written and unwritten rules that shape and influence every aspect of how a school functions, but the term also encompasses more concrete issues such as the physical and emotional safety, the orderliness of classrooms and public spaces, or the degree to which a school embraces and celebrates racial, ethnic, linguistic or cultural diversity."  (edglossary.org, 2013)

I believe that in order to create that culture of charity, we must begin with the attitudes of compassion and respect toward our fellow man.  Charity is indeed about helping those in need, those less fortunate, but sometimes those needs and misfortunes are not obvious and/or are misconstrued.  That rich kid who is lonely and depressed is also a person in need.  The new kid in school who needs a friend to have lunch with doesn't feel very fortunate. There are groups of folks who are obviously in need but let's not overlook the small opportunities to help one another.

I'm not sure exactly what's needed to create that culture of charity, but I know that we need to go beyond the obvious and start small.  I think we need to teach - and most importantly model - that charity is so much more than donating money or clothing.  Charity is humbly giving of ourselves because it is in giving that we receive.

#BestYearEver
Posted by Unknown at 5:59 PM