Bird In A Cage 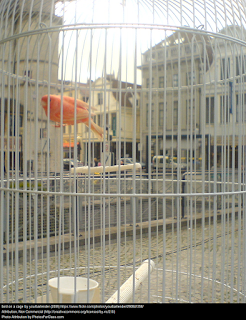 Many of my students routinely ask me to proofread their written work for other classes. My newcomers are especially notorious because most of them compose their writing in their native language and then use a tool, such as Google Translate, to translate the content to English. Translation tools work relatively well and generally capture the gist of the message, but they are not perfect and it usually requires some cleanup.

Last Friday, as I've done on many occasions, one of my newcomers asked me to look over a piece she had written for her English class. The class had just finished reading My Forbidden Face, which is the true story of a teenage, Afghan girl and her personal account of her life as the Taliban seized power in 1996. Below is a screenshot of her assignment.

Like many newcomers, she first translated the instructions, then composed the writing piece for her project in Spanish and finally translated her composition to English. While I did some editing, her message for the most part was left intact. I was very touched by her thoughts and felt compelled to share them here on my blog. Although I'm not releasing her identity, I did have her permission to share. The italicized text below has been copied and pasted directly from her Google doc.

"I remember the times I spent at my old school. They were the best and I will never forget those days. The teacher asked us to talk about a situation in which we personally have felt trapped by society or oppressed by our peers. I chose the option of writing about feeling oppressed because I thought it will be easier to relate to my current situation.

I always enjoy being at a new school because I am very social and like having many friends. A new school gave me the opportunity to make new friends. I remember the first day at this school when I was so eager to start and meet new people. I think my dreams were shattered because of a few people who didn’t even know me and judged me based on my lack of English language skills.  People who think that because I don’t speak or write in English, I am not capable of achieving my dreams.  This the most unhappy I have ever felt.  I felt left out in a world that was not for me, encountering more obstacles than I ever imagined. I'm not afraid to meet and get to know others, even if we don’t speak the same language. Not knowing English is so difficult for me now.  I feel like a helpless animal that just wants to be free, spread abroad his wings to fly and travel the world.  I see only iron bars that are keeping me from fulfilling my dreams. As far as those silly people who mock me or ignore me I have no other words to describe them than the iron bars that have kept me locked in a cage without being able to spread my wings and fly. I have also felt scoffed when trying to talk to others who don’t even try to understand or reach out to me, but I will not let these obstacles get in my way.

There is a difference between a defenseless bird who cannot stay in the cage and one that is willing to fight to be free. I do not have to stay in this cage. I have to extend my wings and fly, no matter what they say. I learned the first time that I cannot sit and expect someone to me help me out of this cage. I have to move forward and I will."

A language barrier is most definitely a constraint, and just like a cage, it traps individuals, limiting their activities and potentially stifling dreams. What I most enjoyed about reading this passage was the fact that she is keeping herself at the wheel, as she "cannot sit and expect someone to help her out of this cage." This young lady moved to Mooresville from Mexico in November 2014, knowing no English whatsoever- not even her colors or numbers. Yet, she enrolled in drama class and was on stage a few months later performing in front of a crowd. Her roles were minor, but she gave it her all and was successful. She later tried out for color guard and made it, despite the fact that there was not a single Spanish speaker on the team. Frankly, I was concerned at first, but she was not. She wanted to dance and is good at it. Therefore, she felt that her talent would pull her through and she was right.

She is still struggling but is not afraid of risk. This young lady has proven time and time again that no one but her has ownership of life, and she will not let anyone dictate her future. The future looks bright for her if she stays on this course and does not lose momentum. Her cage door is open, and soon she will fly away and reach new heights. She is immensely inspirational to me - as are most of my ELLs - and I hope her story will inspire you as well.

#BestYearEver
Posted by Unknown at 7:30 AM