Back From The Future 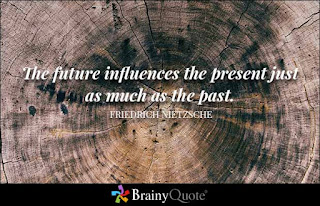 One of my favorite movies of all time is Back To The Future, especially the first one. I remember going to see it with some friends, not having any idea what the movie was about and being at the edge of my seat the entire showing.  All that time traveling was very entertaining, but I especially loved how having visited the future and changed the present day.

The quote pictured here is one I posted on my board at both schools this week and it generated some wonderful reflection and conversation.  I intended the discussions to be inspirational for my students, but in the end I found myself inspired and motivated not only by the quote, but also by their responses. My high schoolers' as usual were right on target.  They are great group of young people who embrace reflection and dig deep into every quote we discuss. My middle schoolers, on the other hand, usually need a great deal of scaffolding and are not so eager to reflect, but I must say that this week many of them dove right in.

Back in September, I asked each of my middle schoolers to develop a goal plan.  I provided them with sentence starters to help stir their thinking and coached them along the way as they identified a specific goal for the school year and developed a plan for achieving it.  Even for my advanced ELLs, it was challenging as they were not accustomed to all that deep thinking.  When they finished their plans, they published them on their blogs and I let them know we would revisit these plans mid-year to ensure they were staying on track. Well, midyear came and with ACCESS testing underway, we didn't get to them.  None of the students brought up the goal plan - perhaps wishing I had forgotten which I certainly did not.

We are now at the end of the 3rd quarter and I thought this would be an appropriate time to look back.  Because of an adjusted schedule, ESL classes were shortened so it took us two periods to complete the reflections.  First, we read the quote aloud and I asked them the following two questions: (1) How does your past influence your future? (2) How does your future influence your present.  The first question was easy, but number two puzzled them a bit. Some quickly expressed their confusion, while others interpreted it as the present influencing your future. Middle schoolers are not often abstract thinkers - especially when their language skills are lacking - so I was not surprised at their responses. Naturally, since this was their reflection I kept asking questions, answering their questions with more questions until their came to their own answers.  I was also pleased to hear some of them acknowledge how much their writing skills had improved since September. They are still not there but there's certainly evidence of growth.

So, this week as we analyzed and interpreted a quote and applied it to their goals, my students and I embarked on a time machine that took us from the past to the present, then to the future and back to the present.  All that travel made them a little dizzy at times, but in the end we all realized that it's not only the past that affects our present, but it's our future that has the greater impact.  None of them had ever given their goals that much thought up to this point, viewing it as merely an assignment for ESL class. After our discussions, they went "back to the future" and reviewed the goal plans.  Some made a few adjustments, others left the goals as is, but they all realized the importance of goal setting and how those goals influence the choices we make in the present.

As my students reflected on their goals and aspirations, so did I.  The past is gone and unlike the movie, we cannot travel backward and forward in time.  While we are inevitably impacted by where we've been, it's where we are headed that determines where we are right now.  It's not about where we went but about where we are going.   In order to reach our intended destination, we need to take the right road.  Many of us may get distracted along the way and miss an exit or take the wrong road, but as in any road trip, we can always make a u-turn and get back on track.  Others may need to speed up or slow down, while some will just change their mind and decide to head somewhere else. Regardless of where you choose to go, I think we can all agree that it's our future that indeed has the greatest influence.  It is that destination (our future) that will influence the actions and choices of today. I reflect and learn from my past, but knowing that I have a hope and a future is what makes today and everyday worthwhile.

#BestYearEver
Posted by Unknown at 9:14 PM